This post requires a basic knowledge about Shapes and Inline Cache. If you didn’t read V8 function optimization, it might be difficult to follow this one.

Every time someones talk about “performance” in React it’s usually about virtual DOM. It is an important piece of react but we will focus on sth else today (still connected).

In 2017 on F8 conference React announced a major rewrite of their core algorithm. That’s where Fiber comes from. But what that exactly is?

A Fiber is work on a Component that needs to be done or was done. (another words “wrapper for processing”). There are different ways to create Fibers but all of them have the same data structure (that’s important for us). These are only some of them:

You can check how Fiber looks right here

We’re not going to go deep into Fiber internals (maybe next time). What is important is that React uses those containers instead of operating on components directly.

Now let’s see that react does when we return JSX:

that transforms it into:

and creates ReactElement which is just another kind of container.

I’m going to simplify React’s internal structure a little bit, to make it easier to understand what it does. Besides that, I will use a class instead of function for FiberNode:

That’s our component classes which should look familiar and createElement which returns Element like structure (oversimplified).

Here we have a definition of our FiberNode and one way we could create it. It’s important to know that when passing our element, FiberNode created from that element has the same shape as any other FiberNode (even if we’re using different component types).

What would happen if you just generate those components manually and assign additional properties to it?

How that helps us run code faster

As you might know, every time there is a change in React, it has to go through the reconciliation process. Reconciliation is using fibers to figure out the next tree. How does it works?

In the end, it returns null or results of one of those two functions (surprise… it’s Fiber).

From this point, reconciler is just looping over all Fibers using performUnitOfWork and waits until workInProgress is empty.

What is important is that React not using recursion to go through the tree. They are using simple while loops to avoid having large stacks (maybe if we could get PTC into JS that would be different). 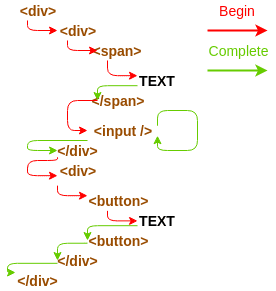 That’s where we could spot optimization in React structure.

Because all of it is complicated enough, let’s check how functions behave when they are called thousands of times with our simplified structure:

I know we’re not referring to returned unitOfWork, but that’s just to run doSomeWork many times.

Why the results are different? Mainly because of FiberNode wrapper. Every time function is called V8 creates sth called Inline Cache (IC). ICs are used to optimize function execution when object with the same Shape is passed into it. As you might remember our fibers have the same map:

and our components haven’t

Because of that simple thing, V8 cannot optimize doSomeWork for components 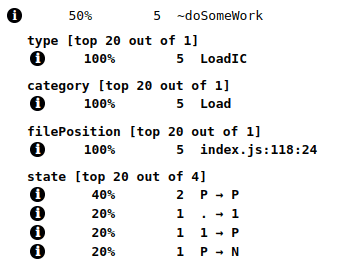 but it can for fibers

If you look on screenshots above, you can notice that first time V8 goes through premonomorphic (.) -> monomorphic (1) -> polymorphic (P)-> megamorphic (N) states but second one stays in premonomorphic (.) -> monomorphic (1) state. In my previous post I’ve described how optimization works in V8. Here we have to deal with Megamorphic function and that means it won’t be optimized by the engine, on the other hand we have Monomorphic function which is optimized for a given Shape (Fiber’s Shape). So even with an extra layer (more complicated object), function might execute faster.

This is just one of many optimizations done inside React codebase. Reason for describing this one is because it’s useful outside React. Angular is using the same approach with sth called View Nodes. You might even want to implement this kind of structure inside our own application.

I have to apologize for oversimplifying React structure. I really encourage you to check it out and see how workLoop actually works under the hood. My point was to show that even if you have to process a lot of different components, there is a way to speed up function execution by creating “special” containers instead of passing components directly.

If you want to run that code on your machine check out this gist. Feel free to modify components or FiberNode implementation and see what happens.

And ofc have a nice rest of the day :)